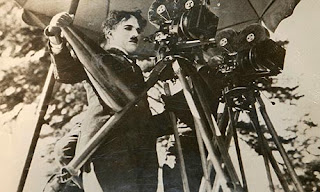 Here are a series of Chaplin montages that I made over a course of a year. I somehow stumbled upon Charlie Chaplin's work and got hooked. After watching his films I was inspired to take clips from various Chaplin films and put them together into one  solid video so that I could watch them anytime I wanted  for my own enjoyment this of which was only possible after I found a website where you can download most of his films online for free located down below. I thought after a few videos I had exhausted all the Chaplin footage but I am still making them to this day all thanks to music and Chaplin's collosal artistry:
Free Vault of Chaplin Films
http://www.archive.org/search.php?query=charlie%20chaplin%20AND%20mediatype%3Amovies
Series of Chaplin Montages from newest to oldest (all the videos tell a story that we all can in some measure relate with)


Most of the videos were made to put some good music to use. Music put to any video has a way of redefining the nature or intent of the video. This is how I could remake each scene and turn it into a story. Basically I wanted to share music and the art of Chaplin in an easy assessable format as not everyone will go out and watch silent black and white films 100 or so years old.
Posted by Melo San Chaz at 12:08 AM