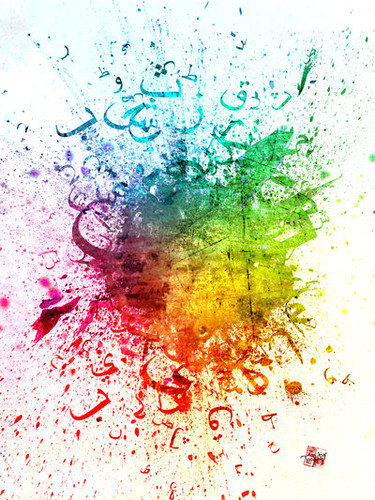 Splatter Art
KALLOS-GRAPHE
CALLIGRAPHY
"Calligraphy (from Greek κάλλος kallos "beauty" + γραφή graphẽ "writing") is a type of visual art. It is often called the art of fancy lettering (Mediavilla 1996: 17). A contemporary definition of calligraphic practice is "the art of giving form to signs in an expressive, harmonious and skillful manner" (Mediavilla 1996: 18). The story of writing is one of aesthetic evolution framed within the technical skills, transmission speed(s) and materials limitations of a person, time and place." (Wikipedia)
It is questionable whether some of the figures in the picture are in fact CALLIGRAPHY or just letters of a LANGUAGE which shows that this art CALLIGRAPHY can also be language at the same time (i.e. arabic) and language can also be CALLIGRAPHY as well (i.e. graffiti).  To some CALLIGRAPHY and LANGUAGE are one and the same by which beauty in communication do not collide.
Recent Discovery in the Dearborn Michigan Arab American Museum (11/27/10): "In the Arab-Islamic World, the calligrapher was the most venerated of all artists because the angel Gabriel revealed the word of God to the Prophet Muhammad in Arabic, it became the Holy Language and the only language for the Holy Book, The Qur'an. A scribe copying the Qur'an thus performed a pious act and his goal was to make the word of God as beautiful as possible. Different styles of script developed from the wish to adorn the Qur'an." "Calligraphy remains an important characteristic of Arab art."
Posted by Melo San Chaz at 5:45 PM