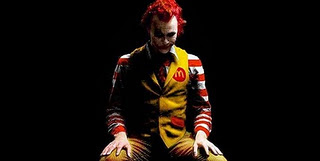 OH! the HORROR of the MCDONALDS food chain!
'The Mcdonalds Invader 1'
http://www.youtube.com/watch?v=U6EnMCwwa0I

talk is in town about a mysterious outsider who's disrupted a mcdonald's drive thru ordering tons of chicken nuggets but then vanishing without picking them up. wifi's have been hacked into. bathrooms have been nuked with gas bombs. vomit has been found near the cash register. trash has been neatly arranged in geometrical orientation. foreign attack is imminent upon mcdonald's headquarters. get ready to evacuate the premises. there is no time to supersize or get a refill. order your french fries and big macs quickly all you gluttons cause he's coming to take over a mcdonalds near you!
'The Mcdonalds Invader 2'
http://www.youtube.com/watch?v=5H_cSI0Vb9Q

people have been spotting strange lights hovering over mcdonald restaurants. safety is a issue especially in those double drive thrus with their 12 feet high roofs. roll down your windows at risk all you patrons cause he's creeping pass the drive thru as you order your mcrib sandwich and two for one apple crisp pumpkin pies!
'The Mcdonalds Invader 3'
http://www.youtube.com/watch?v=OolCYps_qps

unidentified flying objects have been seen directly above mcdonald sign posts. ronald mcdonald has been notified and is making precautionary measures but with increasingly strange activity it seems like invasion is fastly approaching leaving us with little room for escape. so after much suspense and anxious anticipation the mcdonalds invader makes his special appearance! (FINALE)
'The Playground Tunnel'
http://www.youtube.com/watch?v=ckY7x7Pncxg

this is part of the series of 'the mcdonalds invader' videos: the mcdonald invader has chosen his victim for the playground tunnel tube of death! whoever goes in will not make it out alive! (suspense horror) side note: some people are deathly afraid of tight spaces, tunnels, elevators, etc.
'The Mcdonalds Invader 4'
http://www.youtube.com/watch?v=ObnGQkpAHic

THREE YEARS LATER: the mcdonald invader hasn't been seen since his last sudden abduction. customers have resumed their regular dollar menu dinners and after hour orders. while everybody is calm and at peace the mcdonald invader has returned and is back lurking in the darkness! (SEQUEL)
'I KNOW WHAT YOU ATE LAST NIGHT!'
(using strange humor for some videos i made that has the potential to be a suspense horror film)
ELO!nk