!NOSFERATU!
http://www.youtube.com/watch?v=sMl6hUZHBqY&sns=fb
THOUGHTS:firstly i found this video on a friends facebook page who is into the profession of making silent films similar to charlie chaplin. (his name is 'thomas nilsson' if you want to look him up. his work is much underrated and unnoticed. if you are in need of a actor for a film use him. he is swedish and very talented) anyways his personal opinion was about nosferatu being a better film than the 1931 dracula as it came out before the original. (this same debate is going on with the swedish version of 'the girl with the dragon tattoo concerning the american remake coming out this december) after watching the trailer i was amazed at the silent expressionism alone with the use of silhouette, colorful scenery and dazzling make up that reminds me of 19th century plays. i was drawn to the fact that nosferatu actually was the 1931 dracula film but with a different name cover because the studio company wasn't permitted to the novel. so count dracula was changed to count orlok and vampire became nosferatu. secondly this led me to search for the etymology of the word 'nosferatu' which was like opening a can of worms. here are several viewpoints on the etymology of nosferatu: nosferatu may have come from a ROMANIAN cultural folklore about a illegitimate child who after its death rises from the grave infatuated with the lust for blood, having the power to take lives, and sex, having the power to impregnate (give life) to those who's fate is to become the moroi. now the moroi is the romanian name for vampire or ghost but more interestingly it is also the name for the phantom of a dead person that leaves the grave to draw energy from the living. this act kind of sounds similar to how a vampire sucks the blood from the living. additionally the moroi is associated with werewolfs. interestingly so in the nosferatu story thomas hutter is warned of a werewolf wandering around which is in reference to nosferatu. in another part of the story thomas hutter refers to the nosferatu as the 'bird of death'. if you look up moroi in the card game magic the gathering one of the characters used is the moroi who is defined as a vampire and the picture looks like a flying bird beast which is not unlikely as we all know vampires can turn into bats. also part of nosferatu may have come from the latin word FERA which means any kind of beast animal.

nosferatu may have come from the greek word "NOSOPHOROS" (νοσοφόρος) which means disease bearing or disease carrying. this is seen in the film when unexplained bodies are found dead obviously after 'dracula' preys on his victim and people attribute it to a plague going around. this incident of correlation between vampire and dead bodies could not have occurred in the 1931 dracula film because in nosferatu instead of the vampire turning other people into blood suckers, like as in the original bram stoker story, the bite actually kills them. and if you think about it a vampire is like a unclean needle that sucks blood from other people's veins. this would naturally cause diseases like any unclean transmission would thus the meaning 'disease bearing' takes on a whole new light. nosferatu may have come from the latin word 'SPIRARE' which means to breathe. for the vampire the only time it truly breathes is when sucking blood. the need for blood is as vital to him as the air we breathe which makes sense because anything dead needs life to live and blood is the life of the flesh. without blood you are dead so in a sense vampires lust after the living because we have something they don't have: blood. its not so much a lust as it is a addiction. vampires need blood to survive just as humans need air in order to live.

nosferatu may have come from the romanian term NECURAT which means unclean. this goes along with the etymology of the greek word nosophoros which means disease bearing except necurat is more related to the occult. nosferatu may have come from the romanian term NESUFERIT which means insufferable. insufferable means unbearable. this explains why at the mention of the name count orlok people became frightened, why when thomas hutter finds out that count orlok is the nosferatu he faints (including his wife later on), and why so many people whom the nosferatu preys on end up dead. these occurrences are examples of something unbearable. 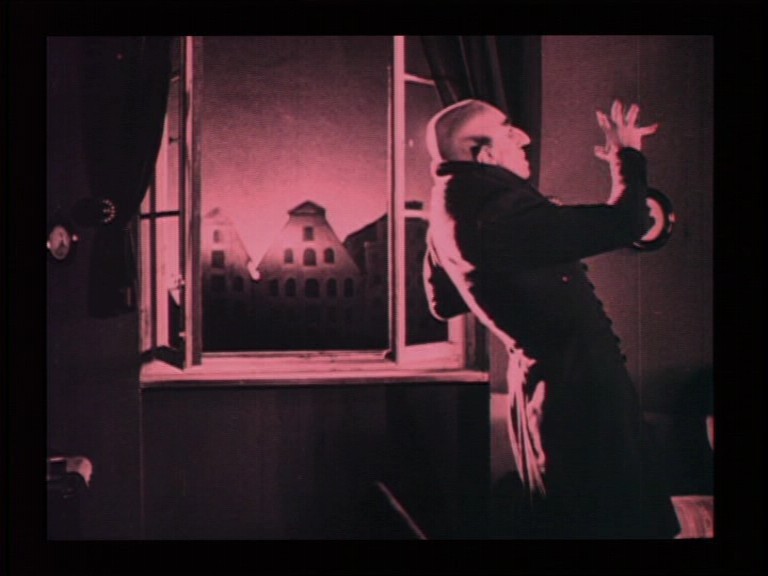 nosferatu may have come from the romanian term NECURATUL which means 'the devil'. this goes along with the etymology of the romanian words necurat and nesuferit which respectively refer to the devil. the devil is usually associated with anything evil, dark and sinister. he is characterized as a roaring lion seeking whom he may devour which sounds very similar to the workings of a werewolf, vampire or any creature of the night that prey on vulnerability.
now after seeing all the different view points of etymology for the term nosferatu it is obvious there is no structured meaning which suggests to the fact why a lot of the images of the nosferatu were in silhouette shadowy form. this may have been done to keep the origins and definition behind the nosferatu a mystery for us to ponder upon! 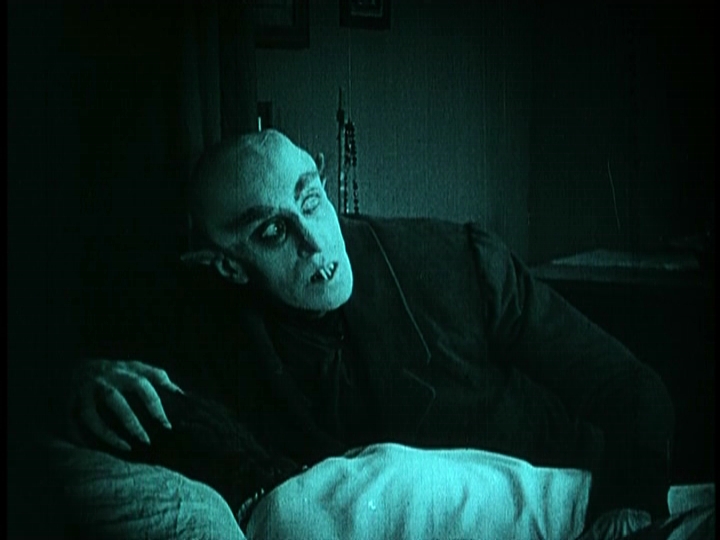 side note: a sequel could be made centering on how the nosferatu as a moroi while sucking the blood from thomas hutters wife impregnates her and gives birth to the strigoi a immortal vampire that emerges from the tomb of ellen hutter and therefore the nightmare continues. also the fact that ellen hutter offered herself as a sacrifice makes her sort of a christ character because she knew that the only way to defeat a vampire was for a woman of pure heart to lure it all night into the morning. christ was a innocent lamb and in his death he destroyed the devil just like the woman did the vampire. as guillermo likes the aspect of free will and the power of choice the crux of the movie can be about the baby growing up in a adopted home being taking care of by human parents then later on finding out his origins, where he was found, who his real father is, why he is so different. this thrusts him into a identity disorder because everything in his life he thought was real turned out to be a lie. this propels him to rebel. he starts giving into his beastly vampire nature. he experiences a dark night of the soul. he sinks into depression. he becomes a anarchist. but then he starts to see who he's turning into, the evil nature within him taking over and the negative effects it is having upon his family and loved ones so he decides to humble himself, accept his identity, control his passions and lust for blood and in this he becomes sort of a unlikely hero/once persecutor like the apostle paul to the christian faith but now a proponent using his gifts to fight evil and protect the human race despite his apparent difference in the world.
(now i haven't yet seen the movie. this is all coming from my observance of the trailer and my research. i am sure after watching it i will have many more ideas!)
http://vampireresearchsociety.blogspot.com/2009/02/nosferatu-origin-and-definitions.html