In order for a film to be considered horror it must have the aspect of suspense, really ugly looking people that borderlines the demonic and loud screeching noises that produce jump scares. without these things it wouldn't be scary but as of late i've been opened up to a realm of understanding terror that has given me a interest into the true nature behind horror. i see now that true terror doesn't necessarily need to have or be dependent upon suspense, demonic looking creatures and loud screeching noises. a true horror film will try to go as long without such tactics but yet convey the same level of terror for the reason being that the genre of horror is simply a world of fantasy meaning that terror is experienced differently depending on ones beliefs, thinking and circumstances. for example on a regular basis everyone doesn't see ghosts floating around, beheaded beasts, mutated creatures, little girls with twisted heads, etc. this is all a conditioned experience in the sense that only a select few experience it in their own inner worlds. people who experience hauntings don't ask themselves 'if there is a ghost' cause they already know but rather they ask themselves as guillermo puts it 'what is a ghost'. when we talk about ghosts we are dealing with something supernatural, paranormal, spiritual and even philosophical. the movie theorizes that ghosts are not necessarily dead people's spirits wandering around but on a even deeper level "a tragedy doomed to repeat itself time and again. an instant of pain, perhaps. something dead which still seems to be alive. an emotion suspended in time. like a blurred photograph. like an insect trapped in amber." with this definition we have a totally broader spectrum of how to define ghosts. what this infers is that even humans can become ghosts while still alive. the question we must ask ourselves is if the ghost itself is more terrifying or the pain surrounding its death? is the image of the vampire more terrifying or the disease? is a monster more terrifying or the hate that molded it into one? is a demon more terrifying or the nature that it possess'? cause its the latter that turns them into such. it is jacinto's greed for gold that turned him into a animal without remorse. therefore every true horror movie must hone on the precipitating circumstances surrounding and/or preceding the object of scare because this is what creates the terror! this is why i've gravitated toward all of guillermo's movies for the reason being they capture true horror without needing all the scare tactics not that guillermo isn't capable of that. in fact he once created a short horror film called 'geometria' that was completely demonic and bloody gore. the funny thing was that the terror didn't start with a monster it started with his mom constantly nagging him. even guillermo says himself in the interview 'a evening with guillermo' that most of his artistic career came about through his childhood years of pain. the reason he can so perfectly communicate horror films is because he experienced it himself. 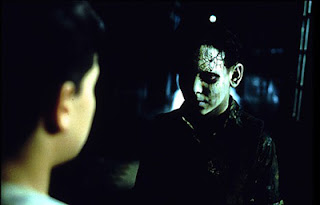 i believe horror, and guillermo can attest to this, is as relevant and necessary a thing as happiness to convey in stories because the human experience isn't simply fluffy clouds and beautiful red roses. although ones experience in this world varies immensely based upon different circumstances, social upbringing, demographics, etc but nevertheless the experience of pain is a burning memory seared into ones brain, a reality that you can feel and touch days after. most people experience such traumatic moments at least once in their life which is enough to leave a lasting mark. since pain is the biggest emotion that people avoid it is also the most focused on whereas happiness is sort of a lofty thing one has to attain to it is less real than the apparent reality of pain that humanity experiences as a norm. the ability to triumph in the midst of pain and find humor in it creates a rare beauty to behold. this form of beauty more than likely is a kind of happiness as a gift that is given when its presented after the backdrop of terror and pain. if one dives to the depths of hell first he is able to more appreciate the heights of heaven after. if such movies are able to sympathize with mans emotions then it provides a spiritual experience that has the potential of healing wounded souls.
not to mention that dr. casares is like what the ghost of jesus gris in cronos would be after he died. at the end of cronos before jesus gris dies he says 'i am jesus gris'. and at the end of the devils backbone dr. casares says 'i am a ghost'.

not to mention that carlos is like the kid version of john myers in hellboy because they both possessed a innocent and brave spirit.

and the much needed change they brought, carlos to the orphange and john myers to the bprd