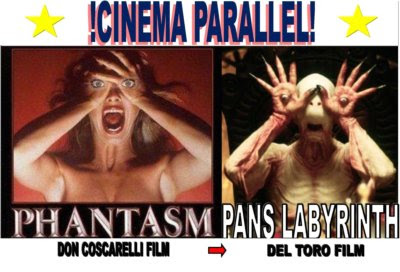 Pans Labyrinth:
"Del Toro told me that, in imagining the monster, he had settled on a twisted rule: the Pale Man could “engage in gluttony only if a kid indulged in gluttony. If a kid broke the rule of not eating, then he could.” When Ofelia snatches a grape from the table, the curse is broken and the Pale Man quickens. In a sickening change of silhouette, the ogre picks the eyes off the plate and squishes them into his palms. Placing his hands in front of his face, like goggles, he pursues Ofelia with a shuffling gait, his outstretched fingers like grotesque eyelashes. The image, del Toro said, owes something to a poster for the trashy 1979 film “Phantasm,” in which the eyes of a screaming woman can be seen through the hands covering her face."
Sources Cited
http://www.newyorker.com/reporting/2011/02/07/110207fa_fact_zalewski?currentPage=6
to be continued...
Posted by Melo San Chaz at 3:28 PM