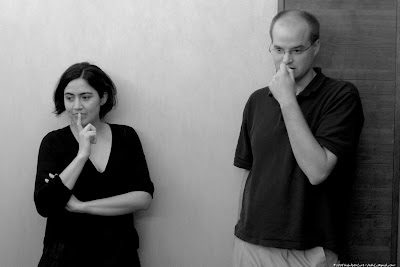 SUBCONSCIOUS MIRRORING
In psychology there is a concept called 'mirroring' that is defined as:

"the behavior in which one person copies another person usually while in social interaction with them. It may include miming gestures, movements, body language, muscle tensions, expressions, tones, eye movements, breathing, tempo, accent, attitude, choice of words/metaphors and other aspects of communication." (wiki)

As we see from the definition above this occurrence of mirroring has nothing to do with reflective surfaces. There is no mirror here. The natural phenomenon of mirroring predates the use of mirrors all the way back to the beginning of time where we see eve eating the forbidden fruit and then adam follows shortly after mirroring her even after he was told not to. There is a natural impulse implanted in every human being to mirror things. The mirror/ing is invisible and happens almost automatically and subconsciously. The mechanism of mirroring is subconsciously ingrained into our psyche so that we naturally imitate whatever we see or feel/imagine.

Mirroring essentially is a subconscious phenomenon of the mind that happens without ones awareness. In fact our awareness of it has become so dulled and imbedded into the natural way of life that we don't even notice it's effects from the assimilation of habits and norms to the learning of accents, social taboos, clothing styles and etc. The interesting part about all this is that we think we have complete control of what we do from day to day but a lot of our actions are influenced by and is the product of our subconscious mind. Consequently a lot of our decisions are the direct result of our initial mechanism of mirroring.

In my experience i've noticed that i've adopted the style and dress of certain musical artists and actors that i admire without consciously and purposely doing it. After listening to certain musicians i've noticed that i began to play like them without consciously and purposely trying it. Also i've noticed that after watching movies and certain music videos while working on my own film projects the final result of it resembles the artistry of certain directors and producers without consciously and purposely attempting to copy them. I don't intentionally go out and copy people or things like a mime would do but the occurrence of mirroring produces a coincidental effect. The very first time i see or hear anything from external stimuli it is etched into my subconscious mind as a seed trying to sprout its way out into the outer world to be reborn. This happens sometimes within seconds or minutes and other times it takes weeks.

The implications of this are as follows:

Everything we see or hear enters our subconscious mind as a idea in the form of a seed that grows at the rate which we feed attention to it. Eventually it is mirrored back out into the world through our lives. This can happen instantaneously or within time also depending on our beliefs and knowledge. To go even further the bible talks about how:


"And we all, with unveiled face, beholding the glory of the Lord,[a] are being transformed into the same image from one degree of glory to another." (2 Cor 3:18)

This is one account that explains the potential of mirroring that with just the act of looking at anything we could become or transform into what we see. It is not too farfetched as with the cases of some peoples accounts of acid trips or lsd experiences they literally become one with nature. If we are able to mirror facial expression, intonations of voice and body language what else could we be capable of mirroring? Or what else are we subconsciously mirroring?