!'HOW BEER CHANGED THE WORLD'! (summary written version of movie) 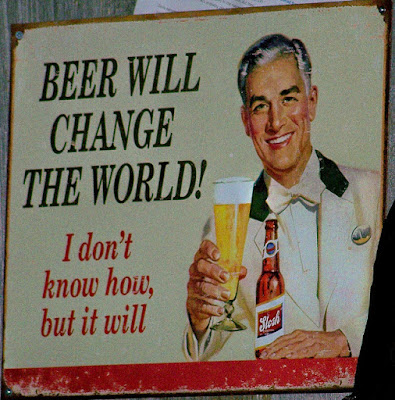 "Beer is proof that God loves us and wants us to be happy.” -- Ben Franklin

NOTE: the validity of these facts are up for question. the main purpose of this post is to provide a summarized written version of the movie for those that haven't seen it. apologies if my writing and facts to the movie are not clear or totally accurate.

the existence of ancient beer

writing was created for recording such commodities as beer. beer was consumed in great quantities while the building of the pyramids. it was a common drink back then. it was drunk so much that it was even found within the bones of egyptians. beer to the egyptian pharoahs was expected to be drunk in the afterlife. thats how important it was to them.

ancient beer beat modern medicine by 3000 years in unknowingly using antibiotics. it was found that the ingredients used to make beer has antibiotics in it. beer saved millions of lives in medieval europe by eliminating bacteria because the water became undrinkable. more beer was drunk back then than any drink in our modern era so in essence beer used to be todays soft drinks but more nutritious filled with vitamins and nutrients so that even children were allowed to drink it! monks were prominent brewers during medieval time and because of this the church grew very wealthy. people would come to church just because of the beer given afterwards!

beer is a saving commodity

beer was one of the greatest commodities which helped create the modern world, namely capitalism. the voyage over to discover america or any sea adventure for that matter was not possible without the usage of beer because all of the water would spoil on the way over so therefore they would have nothing to hydrate themselves. the alcohol and hops in beer is what made the water once fermented suitable to drink. without beer the voyager would not have made it across the seas to 'discover' america.

most of the founders of our country were brewers of beer. taverns, where beer was sold was the main communication hub for people. this was similar to our modern social mediums of today such as google, myspace, twitter and facebook of which valuable information is shared. they didn't have the internet back then. everything was spread by word of mouth. again taverns in particular were where revolutionary ideas and plans were discussed towards the development of the american revolution. even 'the national anthem was borrowed from a 18th century drinking song'. the song was used as a sobriety test. if you could complete the song you were ready for another round of beer. thus its not too far fetched to say that 'beer helped found america' when the star spangled banner our own national anthem was originally a beer based drinking song. in essence america wouldn't be here without beer.

in the 1850's chemist loius pasteur was known for studying pasteurization of which most people think is related to milk but his area of focus was in fact beer. 'beer was the first beverage to be pasteurized.' in the process of this he wanted to see why beer sometimes spoiled. from this he found and discovered bacteria which was previously unknown to modern medicine. from this sprung 'germ theory' which was monumental in that it gave a reason why people got sick. it was no longer left up for chance, superstition or religion. this also spurred people to wash their hands more often. doctors started using common sense and began washed their hands in between surgeries. thus from this we can concur that beer and science go hand and hand.

in order to solve the dilemma of getting expensive and problematic ice from the glaciers to make colder beer which was amplified when the production of beer was slowed down during the spring because of the heat thus melting the ice, a artificial way of creating cold beer was made. so the brewers sought after the possibility and pushed for the making of refrigeration. with this new invention one of the greatest problems of mankind was solved: the storage of food. not only that but refrigeration meant air conditioning, the creation and preservation of medicine (pills), keeping organs alive during transplant surgery and the existence of ice cream.

originally factories were made for the production of beer not for cars. the production of beer in factories was in existence way before henry ford. 'it wasn't the car that put america on the road to economic power it was beer'. 'beer production revolutionized american industry'. the making of glass beer bottles ended child labor in america because of the automate machine invented by michael owens.

beer was so important to america that it was even modified in order to be drinkable in space for future galactic voyages to new 'americas' or lands to be discovered.

in essence from all this it is no doubt that beer changed the world to a large degree. if beer can have so much influence upon the world imagine what it does to you and what you can do to the world!

Sources Cited
DVD: 'How Beer Saved The World' (most of the information from this post came from this dvd material)
Posted by Melo San Chaz at 3:18 PM