!THE PREVIEW: a FUTURE PRESENTATION! 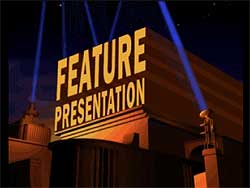 the WORLD of CINEMA as we know it is COMING to a END!
PREVIEWS have always been a central part in the movie going experience. when you go to the theaters one thing you can always count on is a good preview. sometimes these previews or appetizers, if you will, are much better than the main course. they have you salivating in anticipation perked at the edge of your seat for whats next. metaphorically speaking, one can say that the coming attractions are served as a visual stimulator to arouse the audience's mental nerve glands for story intercourse. along that same vein one can also say that the previews are used basically as a method of foreplay before full penetration that causes one to reach orgasm without completion of the full act. using that same train of thought, to this end a lot of people have developed premature ejaculation in which they peak in interest just before the feature presentation so that if the movie doesn't deliver lasting pleasure at least the coming attractions did.

sometimes the previews hold more weight than the actual movie because the vibe/dna of the story is jammed packed into one small time frame which releases tons of endorphins into your brain all at once with little or no break in between. this causes a adrenaline rush. with this you get hit head on with action, mystery, romance, passion, horror and suspense leaving you craving for more. this leaves your mind up to develop all kinds of fantasies about the coming movie so that it solidifies in your head. you then become hooked. this here is the science of previews. if properly executed causes most of the success of movies.

as noted above, since a considerable amount of thought and energy goes into previews, for the purpose of making a good first impression, various bits of information tend to fall through the cracks unknowingly from the unconscious mind of the director/writer that reveal things about the world. if you don't look closely at movies you will miss these hidden messages. there is a matrix to movies that not everyone has the eyes to see its deeper meaning. the previews are revealing a new phase and era of cinema that is drastically changing by the moment. the world of cinema as we know it is coming to a end!

i don't know the details exactly of what lies ahead in the near future although i do feel without a shadow of a doubt from the previews that its going to be mind blowing in its scope! consequently there is a need to brace ourselves for this sudden influx of new ideas and alternate approaches to art. a new renaissance is on the rise that will be so demonstrous and palpable that the theaters won't be able to withstand any longer. therefore a new form of media will need to be created to contain it. we are nearing the tipping point of creativity that will flip the lid on our boxes of reality.

one small step in technological advancement is enough to pose enormous implications and likewise dangerous ramifications to how we use media. without a understanding of these new tools of media things will get out of hand. magic and science, fiction and non fiction, religion and history will converge all at once. at this point there will be no going back to the way things used to be, to the way the world was before. a new horizon is emerging with the rising sun that will bring forth a phoenix of imaginable wonders!

in conclusion, movies and the previews themselves are telling us something if we listen carefully. there is a message woven deeply into the fabric of each story that coalesces into one complete image that bleeds over into our lives collectively. you cannot seperate movies from the real world it always sinks in one way or another. the development and state of media parallels with the development and state of the world. what you see in movies to various degrees and under different forms is being demonstrated or exercised in the world (and vice versa). with that being said previews are not just coming attractions to a feature presentation as we have been told and brainwashed for years to believe. they're a preview of a coming FUTURE presentation not shown in theaters that can be summed up as: the end of the world of cinema as we know it! (never looked so good)