SLEEPER of the NIGHT chapter 2 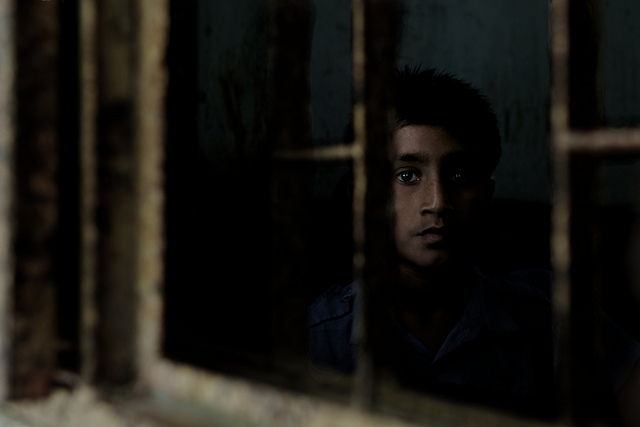 
the boy awoke on his bed almost in a dream like state. something was not right he thought. everything looked the same. his clothes were still on the floor. his books were still scattered about on his desk. his posters were still on the wall. his boom box was still near his bed. his closet was still closed. his guitar was still perched on the chair. his window was still open from the morning (silence)............'wait!' he said to himself. 'i never opened that window. i swear to god that was shut last night. i don't like people tampering with my stuff! who opened my window?! for the last time if my brother is playing tricks on me im gonna wring his ugly head off!' stomping on the floor in frustration he happened to wake up his parents. they came in the room perplexed as to why he was awake at this time but was quickly diverted to the condition of his floor. 'my lord, it looks like a tornado came in here' mom said while falling to the ground. 'son, this is your last warning clean up your room!' dad said while pulling out his hair. his parents walked out the door shaking their heads in disappointment. overwhelmed by this incident the boy quickly fell back to sleep dreaming that his room was clean.

'is he asleep yet? double check just to make sure. in fact somebody sit on top of him to prolong his sleep. no, not on his head you idiot you'll suffocate him. here let me show you watch and learn. you sit on his waist right here between the belly and the legs.' 'what if he turns over?' 'hallow head, that won't happen if you're sitting on him. come on does anybody here have a IQ above idiocy!' listen everyone, we have to get this place in order before he wakes up. no excuses whatsoever! our imaginator has spoken and we must obey. is that clear?' 'yes sir!' 'then let the magic begin': all the clothes started hovering above the ground into the direction of his closet where the hangers launched themselves onto, all the books began floating in the air spiraling in circles onto the shelf on top of the desk in alphabetical order leaving a cloud of dust in the air, all the posters began rearranging and positioning themselves at the right angles, all the other stuff assembled themselves accordingly: the guitar began re-tuning itself as the boom box jumped onto the bed and the window shut tightly as the closet opened wide. 'alright all you imaginatees clear the way for the initiator. we have two seconds before the boy wakes up.' 'who is the initiator?' 'that is unknown. he comes in many forms. though his message is the same. his job is to initiate or transition the boy out of his slumber'. 'ssshhh....he awakes!'

the boy wakens to find his room in order. 'you have got to be kidding me' he said. 'i must be dreaming, i have to be dreaming. my books are on the shelf. my clothes are not on the floor. my boom box is on my bed. my posters are angled right on the walls. my window is shut. my closet is open. even my guitar is in tune. what is going on?!' a voice echos in return 'ill tell you whats going on'. out of the boy's closet walks a skinny old man with piercing blue eyes and a white pigeon on his shoulder. startled as the boy was he backs up to his bed trying to get out the window. 'if you haven't noticed, things have been kinda different around here. wouldn't you like a explanation?' the boy tries to quiet the man so that he doesn't wake up his parents. 'oh you don't have to worry about them. they can't hear me. in fact i don't exist in their dimension and technically neither do you. you see, i have chosen you to be grafted into a alternate reality or dimension of time that parallels your other self. everything is the same as you used to know it except the only difference is you. in this dimension of reality for instance whatever you dream of happens hence the reason why your room is in order. you dreamed it and so it was. the only problem is that we have to quickly train your imagination so that you don't dream of adverse things that could be detrimental to the world and yourself. you see the mind is a powerful thing. we are able to create with our minds. in this dimension of reality the time span between imagination and reality is much quicker than the world you came from. as you think so it becomes.' the pigeon started making noises. 'it so happens that your parents are approaching the door. i must be going now!' the old man disappears into the dark closet as the boy's door opens revealing his parent's faces in utter shock. 'we must be dreaming hunny?!' 'this is not like our son' the mother said. 'youre right,' pointing at the boy 'who are you and what have you done with our son?!' his parents start laughing as the boy puts his hands up in guilt. 'we're just playing with you boy. hey, if you keep this up we may just give you a allowance'. 'he already has a allowance' said the mom 'oh yea, never mind' as the dad snickers under his breath. 'well, breakfast is ready come before it gets cold'. 'ill....... be down in...a minute' the boy says hesitantly. before his parents leave the room they notice some feathers nearby his closet. 'what you been playing with some birds up here?' 'i think... those...came out of my coat' the boy answers sheepishly. suspiciously the dad walks out of the room with the mom as if noticing that something was strangely different about the boy. little did he know that his son was replaced with a alternate version of the boy that would come to change the whole world around him!

refer to 'sleeper of the night' (chapter 1) for background information:
http://everett7.blogspot.com/2011/10/sleeper-of-night.html