!WHY YOU ONCE FEARED THE DARK! (del toro films post) 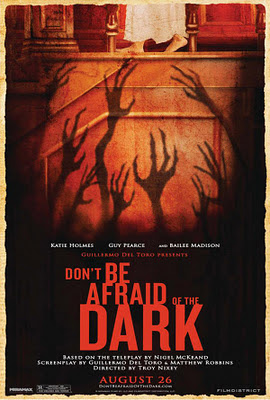 !WHY YOU ONCE FEARED THE DARK!
guillermo's movie 'don't be afraid of the dark' in my mind is basically a extended version of the tooth fairy investigation scene in hellboy II and a continuum of 'the devils backbone', 'the orphanage' and 'pans labyrinth'. all of guillermo's movies, as he explains in interviews, overlap, intermingle and blurr together. elements of the devils backbone were in the orphanage such as the question of 'what is a ghost?' even the characters are similar. the outcome of the orphanage wasn't even what guillermo planned as he mentions in a interview. the original vision of the orphanage was previously completely different than what ended up on the screen which may explain this continuum that we see like a vein that travels all the way through 'pans labyrinth' and now into 'don't be afraid of the dark'. i will explain my reasons for this as i go through various rhythmic rhymings or dancings so to speak between guillermo's films that are spread throughout the movie 'don't be afraid of the dark'.

to begin i must give props to guillermo for repping the game once again with a classic horror film that permeates with old cinema professional techniques. you don't see horror films with this dignity, quality and beauty now-a-days. i wouldn't even classify it as a mere 'film' like seriously because it interacts on so many different realms. it reminds me of a detailed illustrated page turning book with specific chapters having pauses in the middle or acts in succession as in a theater play more so than a traditional quick line by line scene by scene film. the scenes move gracefully as a dancer in a concert does. the background decor, architectural designs, vibrant colors, contrasting lights, shadowing images, camera angles, music impression and placement speak louder than the character lines themselves. the nature of this movie reminds me of the silent film 'nosferatu' with its usage of german expressionism. the impact of this movie delivers the effect that alejandro jodorowsky tries to accomplish in his psychomagic surreal films.

to describe 'don't be afraid of the dark' in relation to some of guillermos other movies it seems to have the visuals of pans labyrinth/hellboy and the story like nature of the orphanage. in relation to non del toro related films it seems to look similar to alice in wonderland and the wizard of oz at some points. the vault to the nether land creatures is similar to the spiral worm hole that is drawn representing sort of a trip down the rabbit hole that alice falls in. as to the creatures they look like a mixture of the tooth fairies in hellboy II and gargoyles mainly for the hunchback appearance. they rightfully don't have wings because they live underground like demons in the underworld sort of similar to familiar spirits being conjured up by a witch. they murmur, they mutter and they whisper silently like gollum from the lord of the rings who has a split personality in which he speaks in third person. likewise these little creatures would speak in plural as if they represented the entire group like the demon possessed man that came to jesus in the bible and said that 'we are legion' meaning 'we are many', that is 5,000 soldiers to be exact according to the ancient roman army.

the girl in don't be afraid of the dark goes missing just like the boy in the orphanage.

the man lost his wife in 'don't be afraid of the dark' just like the man in the orphanage.

when the fairies leave a coin for sally in place of a tooth in 'don't be afraid of the dark' it is similar to the games that the fawn played in pans labyrinth and the ghosts played in the orphanage.

the girl in 'don't be afraid of the dark' is blamed and ostracized for things happening in the house just like with the boy in the orphanage.

the girl's condition in 'don't be afraid of the dark' is attributed to lack of medicine just like the boy in the orphanage.

the little girl sally hirst in 'dont be afraid of the dark' looks like a grown up version of liz sherman in hellboy. they basically seem to play the same character.

in 'don't be afraid of the dark' where the girl sally hirst is outside next to the bench using stones to write her name it is oddly reminiscent of the scene in hellboy I where liz sherman is visited by red at the mental ward. they have the same emotions and facial expressions.

the same old house appearance in the orphanage and the devils backbone is seen also in 'don't be afraid of the dark'. guillermo is known to like houses like this. his second home, the bleak house resembles this.

in 'don't be afraid of the dark' the girl is left alone in a big house a lot of the times. this is something that comes out of guillermo's childhood. he said his parents hardly cared to see about him so he was left alone a lot.

at the end when the girl is being pulled on the ground by the fairies it is reminiscent of the exorcist as if she is being possessed. (non del toro film related)

the girl in 'dont be afraid of the dark' is lured off into another realm just like the boy in the devils backbone, and the boy in the orphanage and the girl in pans labyrinth. the bridging of two realms is in all of guillermos movies to varying degrees.

in conclusion i can attest to the fact that 'don't be afraid of the dark' has put me through a beautiful spiritual experience of some sort as even guillermo himself describes the power of movies as "a religious and intimate experience". he also says that fear is "an instinct absolutely necessary to achieve some form of spiritual perspective." and that "fear of something unknown allows us to take a leap into faith." so then with this 'leap of faith' i plunge into the dark with childlike curiosity!

what was the significance of the light beaming through the windows?

what was the significance of the gold colors?

what happened to kim at the end? was she turned into a gnome fairy?