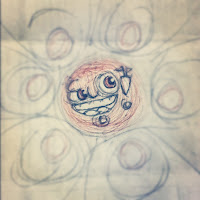 ELO! is the coming new era of avant guarde creative arts that will define the next century in all fields of profession. The future is upon us. Things are moving a lot faster than the way they were fifty years ago. The next famous artists, politicians, presidents, poets, mathematicians, engineers, inventors, musicians, etc will rise up within our generation. We will see it in our day and time. We will live to experience it.

The purpose of ELO! is to provide a beacon of hope and inspiration to mankind. ELO! is a light to the darkness, a revival of lost arts and forgotten treasures. ELO! is a new beginning, a breath of fresh air and a mist of pure water. ELO! is energy released, a power unparalleled.

ELO! will provide the outlet or platform to bring out that inner genius or inspirational spark of the divine latent in every individual. By this we will all collectively evolve as a human race to a higher level of consciousness and existence. The things that we once thought was impossible will become the norm in our present society.

Where to look for ELO!

ELO! will appear as a production company or a business/corporation within the credits and opening title of movies.
ELO! will integrate the realm of fashion and be seen on merchandise such as clothing, shoes and hats.
ELO! will be used as a record label when signing several upcoming artists.
ELO! will be the signature and patent name for upcoming inventions, works of art and publications.

For a little over two years now i've been brainstorming a group of similar minded individuals that engage in experimental activities relating to art, music, entertainment, film, poetry and creative thought that is avant garde in nature. So far its been rather difficult finding such people with the same kind of zeal, passion, inspiration and motivation so i have broadened my search to people outside my location. For instance i have been collaborating with a silent film artist in sweden on several short films and we correspond regularly on film related topics. Even though we live far away we both have a great passion for the silent film era especially when it comes to Charlie Chaplin. Here are a few of the videos we have worked on together:

That is just one example of international collaboration in the Troupe. I am more willing to collaborate with people who are far away and love the arts than a person who is my next door neighbor and doesn't have the same passion or vision.

At this point in time from the most recent Xperience video example (http://www.youtube.com/watch?v=vS6XQ3cAYjc) i now see the X-Troupe as a all inclusive entity that i carry around and invite people to participate in wherever i go. You will bring your talents to the circle mostly either at a spontaneous outdoor street session or in a club indoor enclosed environment. I will participate from within as a insider but also orchestrate on the outside as a director at the same time so that the chaos has some sort of order and the vision of the group is carried out.

Eventually the more cemented we get as a group the more we will operate like a band that performs. The more known we become the more we will travel. The more we travel the more we will grow as a troupe in number as we add people along the way. We will be able to do a yearly tour to visit various troupe members in other countries that aren't able to participate in our meetings. Eventually the troupe might have leaders in several  locations that run seperate groups under the same name just in different spots. They will put on their own productions with the troupe standards in order to reproduce more similar minded individuals thus creating new artists for the future.

This year on the beginning of August I launched my first full fledged business in the industry of selling coffee. When i first heard about 'Organo Gold' I wasn't interested. I thought 'network marketing' wasn't for me or that it didn't work but after several months of thinking about it i felt that i needed the opportunity and hope of making money on the side and was willing to put forth the effort and hard work involved in making my dreams become a reality through the use of this business.

At that point i had exhausted all attempts towards progressing my future career. I had tried to get into the new york film academy but was having trouble with paying for all of the tuition.  I had tried to win the youtube film festival contest that would raise awareness of my film/acting efforts but didn't even come in the top 50 contestants. I had tried to land dozens of jobs  after college to support myself but none provided any gain. Now here i am fresh out of college with student loans on deferment without a job.  It was 'Organo Gold' that provided me a sense of hope that there was a another way of making money and becoming financially free so that i could accomplish my dreams.

Not only is Organo Gold financially beneficial the coffee is extremely healthy.  The main ingredient is a mushroom called 'ganoderma' and it has numerous health benefits that are scientifically proven some of which are the following: prevents cancer cells from growing, helps with diabetes, boosts immune system, helps with anti viral infections, detoxifies your body and so much more. Some of the coffee flavors they provide are: latte, mocha, supreme, etc among black coffee. Not only does Organo Gold offer coffee but hot cocoa, green tea, soap and tooth paste.

Now I am calling all those who want to raise their quality of finances and health to join together in this business so we can all in unity support each other in living the life we were meant to live. If you want to see a quicker development of ELO!nk and the X-Troupe please sow into my business so that i can have the equipment and funds to run it.

If you are interested in joining please contact me at: c7dalton@gmail.com
Feel free to try out the coffee for yourself here: http://chadeverett.organogold.com/r/US/

Posted by Melo San Chaz at 1:19 AM No comments: